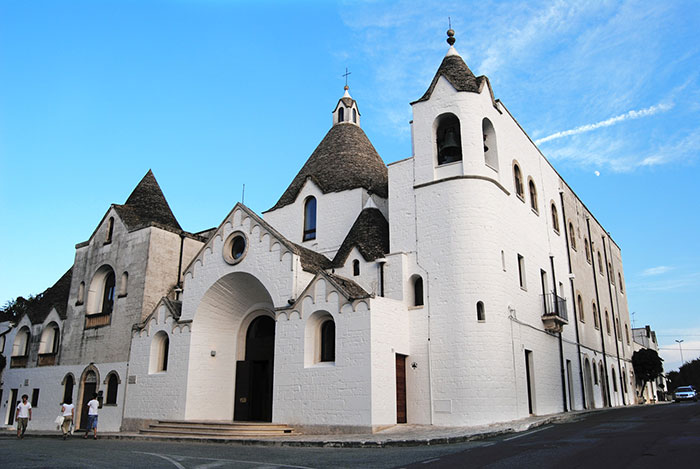 the capital of the Trulli

Alberobello is the capital of the Trulli and only 17 km away from B&B Villa Lavanda. Even though Alberobello is a tourist place, it is definitely worth a visit. Alberobello attracts tourists from all over the world. Around 1600 Trulli (houses with a conical roof) have been preserved, including a very beautiful Trullo church. During your visit to Alberobello people will let you taste their typical Apulian specialties and liqueurs. Of course there are many souvenirs for sale from kitsch to very tasteful jewellery, linen towels and tablecloths.

The name Alberobello comes from the Latin Sylva Arboris Belli, which refers to the oak forests that once surrounded the city. The centre is built on two hills: in the east lies the new city, in the west the old historic city.

Alberobello is known for its many Trulli. Two districts consist almost exclusively of Trulli: Rione Monti and Aia Piccola. There are Siamese Trulli, a Trullo church and a Trullo Sovrano, the only two-story Trullo. In addition, Rione Monti was declared a National Monument in 1910 with around 1,000 trulli and in 1996 the Alberobello trulli were added to the UNESCO World Heritage List.

In the past entire families lived together with the ox, the donkey and the chickens in a Trullo. Food stock was also kept in the Trullo. Nowadays, some Trulli are still permanently inhabited and many Trulli in the countryside, as well as other small rural houses, are used for “villeggiare”.

I found this ice cream shop/bar in Bari and recently discovered that they also have opened one in Alberobello now. So when I was in Alberobello last week, I had to have an ice cream at Martinucci.  You can also drink a delicious coffee there with one of the many delicious sweets. You can find Martinucci at the following address: Via Monte San Michele 57, 70011 Alberobello.